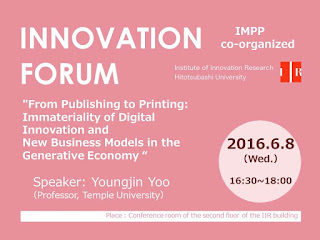 Topic:
“From Publishing to Printing: Immateriality of Digital Innovation and
New Business Models in the Generative Economy”

Abstract:
Digital innovation is rapidly re-shaping the economy as we know it. From Apple’s iPod and iPhone fundamentally disrupting music record and mobile phone service industries to Uber and AirBnB disrupting taxi and hotel industries, digital technology is upending traditional industries. Many start-up companies from Silicon Valley wants to be the “Uber” of yet another industry.  Digital innovation has become the one of the top
strategic issues that garner CEOs’ attention. There remain, however, significant conceptual confusions concerning the exact nature of digital innovation. Existing literature focuses on the role of digital technology in creating superior user experiences (Yoo 2010), ways to build new ecosystems (Anderson et al. 2014; Gawer 2014; Ghazawneh and Henfridsson 2012; Tiwana et al. 2010), or the recombinatorial nature of digital innovation (Brynjolfsson and McAfee 2014; Yoo et al. 2012). Although these are certainly important elements of contemporary digital innovations, I argue that at its core, digital innovation brings rather remarkable and fundamental transformation
of the value creation process. I use the term value creation process to refer to the steps and activities (within and across organizations or industries) that lead to the production of marketable goods.  Traditionally, goods have been produced by transforming material inputs in combination with human skills and knowledge through a stable configuration of pre-arranged activities and material resources. The outcome of such value creation process was a good with an irrevocable status produced through the
irreversible process of value creation (Vargo and Lusch 2004). To the contrary, in the generative economy, goods are being produced by transforming immaterial inputs (such as data and service) into either material or immaterial outputs by mobilizing a large-scale digital infrastructure that often involve distributed heterogeneous actors. The
outcome of such value creation process is a good with transient, revocable and recombinant status produced by on-demand, procrastinated and temporary assemblage of distributed material and immaterial resources performed by the reversible process.  This transformation of the value creation process is enabled by the embedding of digital blueprint (software instructions) directly into physical artifacts. This shift in the value creation process can be characterized as a shift away from the publication logic with an early and final binding of form and function, followed by an irrevocable and
crude transfer of ownership with no regard to how the produced goods render value to the users. Such a process is being shifted toward the print logic with a pronouncedly procrastinated and temporary binding of form and function, with a revocable and fine-grained transfer of ownership, with utmost attention on how the produced goods render value to the users. The transformation of new business models in the generative economy has profound implications for the nature of a firm and its relationship with its
employees.

Place:
Conference room of the second floor of the IIR building