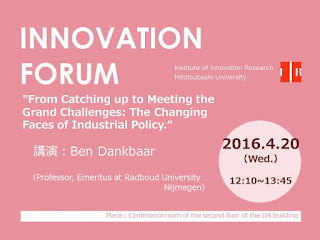 Topic:
“From Catching up to Meeting the Grand Challenges: The Changing Faces of Industrial Policy.”

Summary:
Industrial policy is back on the political agenda, but remains highly controversial. Some industrial policies are heavily criticized, while others are drawing broad support. This paper offers a  typology of industrial policies, which aims to clarify the issues involved and the theoretical foundations for different policies. Four types are distinguished. It is argued that that all four are practiced today, but that they made their first appearance in different periods in history.
Therefore, the typology is called ‘quasi-historical’. The second half of the paper focuses on modern discussions about the role of the state, mainly in relation to the fourth and latest type of industrial policy, the so-called ‘transition policies’. It is argued that discussions about the role of the state have changed in character. Debate is much less about yes or no and more about how. Moreover, these discussions are not simply concerned with political doctrines, but with real challenges faced by modern economies that need to find ways to move to a sustainable development path. This discussion contributes to a theory of the modern ‘entrepreneurial’ state.

Place:
Conference room of the second floor of the IIR building